For its summer exhibition Galerie Miranda is delighted to present works by gallery artists, selected along the themes of nature, calm and the beauty of simple things that we were reminded of during the recent crisis. The exhibition features unique and limited edition works; some exhibited for the first time, by artists Peggy Anderson (USA), Susan Derges (UK), Sally Gall (USA), Gérard Dalla Santa (FR), Mariah Robertson (USA), Terri Weifenbach (USA).

Peggy Anderson is an artist/photographer based in New York and Sweden, currently living in Paris. She graduated from The International Center of Photography (ICP) Creative Practice program in 2013 after many years of photography classes and workshops. Peggy’s work often embraces ritual and typology. “The Morning Dip” book was published by Kehrer Verlag in 2020. Her other signature project and book, “Subway Readers”, has also been exhibited at Fotografiska. This is a series of people reading books on the New York City subway. Some of these images are in the collection at The Museum of the City of New York. While not necessarily a portrait photographer, Peggy finds herself drawn to photographing people not only for the challenge, but also for the interaction. Working with both digital and analog film cameras are part of her creative process. Much of her image making is also inspired by her childhood summers spent in the Swedish countryside. Being an avid traveler, Peggy’s creative practice is inspired by the environment she is in. Peggy is on the board of The International Center of Photography in New York. Since 2012, she has co-chaired the annual ICP Spotlights benefit honoring women in the visual arts. She is also on the board of The American Friends of Moderna Museet in Stockholm. 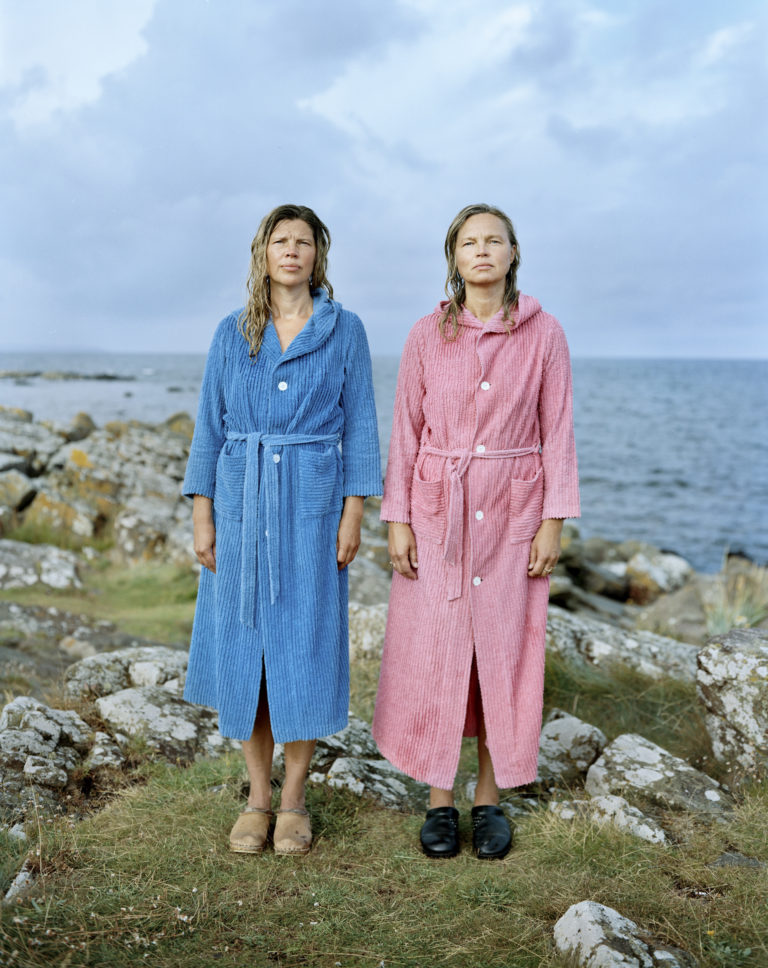 The small coastal village of Torekov, Sweden, is known for both its local pier, 'Morgonbryggan' and for the associated daily ritual of a morning dip in the sea. Locals and summer guests are avid disciples of this sacred ritual which can be both solitary and social. There are unwritten codes of behavior related with this activity, including the most visually obvious, the selection of one’s bathrobe. Through the slow and repetitive process of working with a large format film camera, the photographer Peggy Anderson has gained insight into this community, her native country and her own place within it. The Morning Dip project has been exhibited in Torekov and at Fotografiska, Stockholm in 20125. Peggy Anderson is a photographer based in New York and Sweden, currently living in Paris.
" What began as a project photographing Swedes wearing bathrobes, in the small coastal village of Torekov, has evolved into a deeper examination of my own heritage and relationship to a country where I lived as a child and now spend every summer". Peggy Anderson

Interested in mobility and movement, Gérard Dalla Santa is largely influenced by street photography and American underground literature. His first photographic works date from 1978 and featured urban scenes, the banks of the Seine river, vistas of highways. Since 1993, he has also explored these themes in the USA, drawing upon personal references that include Walker Evans, Lee Friedlander, Robert Adams. From 2000 he broadened his field to include representations of work, bringing a poetic and delicate reading the body and its gestures within the context of labour. In 2015 he was awarded a grant from the CNAP (Centre National des Arts Plastiques), towards a project on the city of PIttsburgh, its industrial heritage within the urban tissue and the city's permanent cycle of demolition and construction. Since the 90s, Gérard Dalla Santa has focused mainly on landscape work, considering mankind's transformative effect on the landscape, memory space and coexistence across time. He first explored the southwest region of France, the greater Paris region where country and city overlap, but also the landscapes of Pennsylvania in the USA. Gérard Dalla Santa received several institutional grants and commissions to produce the works featuring in the publication Les Campagnes Urbaines (Pierre Donadieu, Actes Sud, 1998). His recent landscapes consider places in which the interaction between man and nature is one of immersion, both lending a use value to the landscape and anchoring it in time. Gérard Dalla Santa has participated in numerous personal and group exhibitions in France and in Europe and his works figure in the permanent collections of the Centre Pompidou, the Frac Aquitaine, the Frac Midi-Pyrénées, the Fonds National d’Art Contemporain and the Fondation d’Entreprise Hermès. 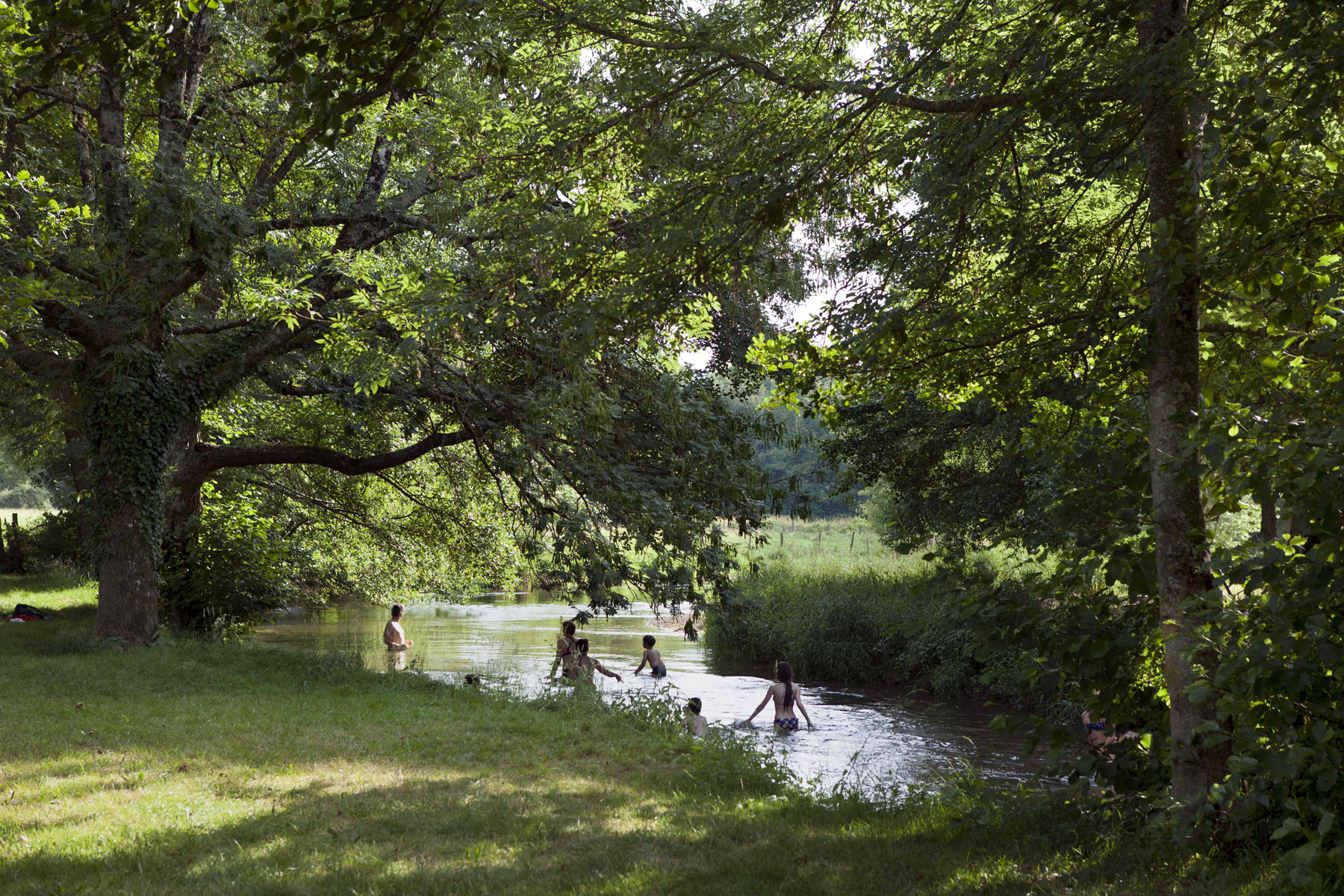 The photographs presented at the gallery proceed from his research into landscape that is anchored in two traditions: documentary photography and that of the outdoor landscape painters (Corot, Courbet, Pissarro and Cézanne...) whose work takes into account the topography as well as the historical and collective dimension of landscape. In these recent landscapes of river banks, proximity and the everyday create a new lyricism. The human forms in the image are so immerged in the landscape that they are unaware of the its beauty. For Gérard Dalla Santa, these images do not evoke a nostalgia for things past but are instead a proposal for the repairing of a damaged world. 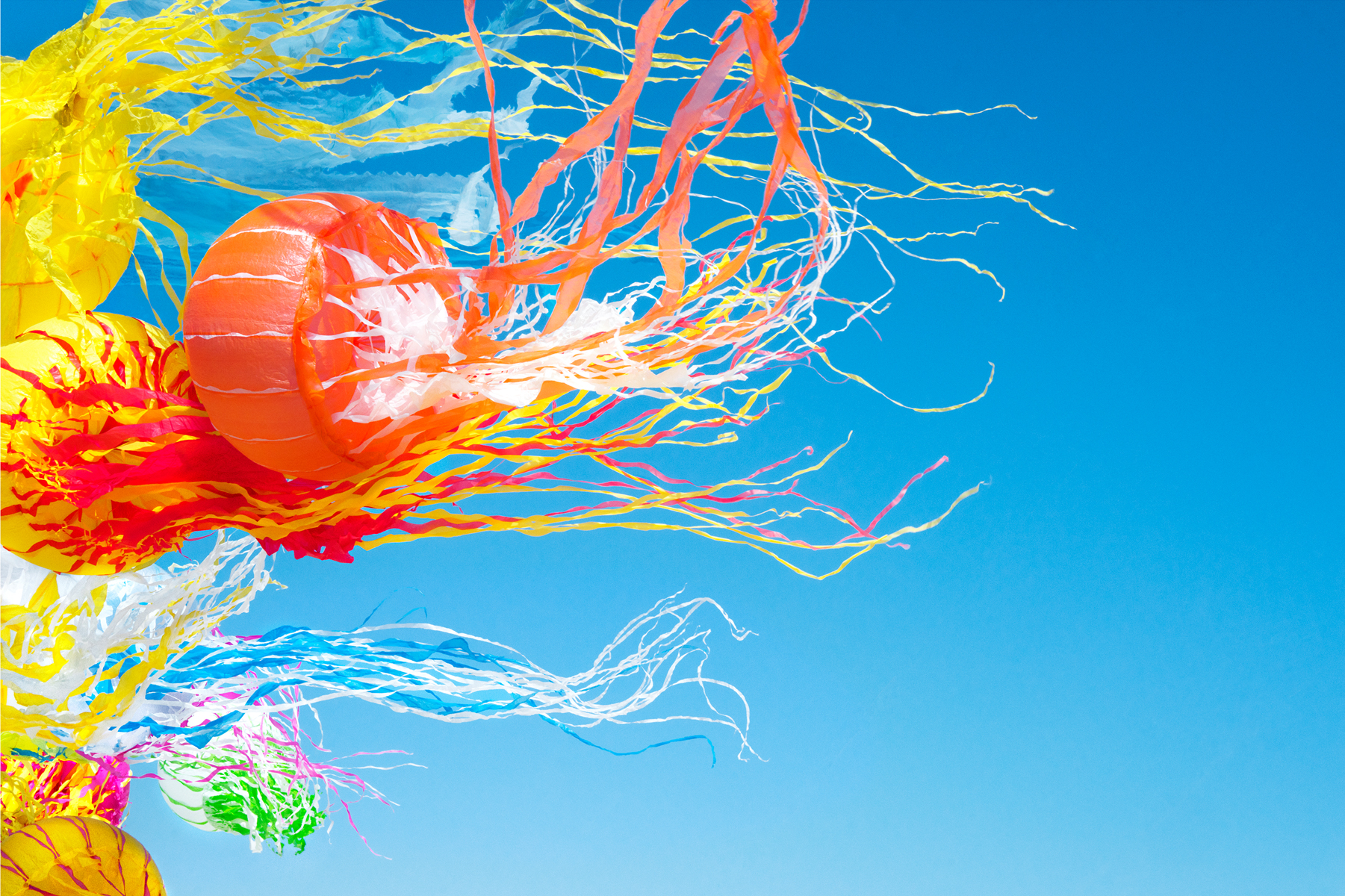 Mariah Robertson received her BA from UC Berkeley and her MFA from Yale University. Her work has been exhibited widely at public and private institutions including the exhibitions What is a Photograph? at the International Center of Photography, New York, A World of Its Own: Photographic Practices in the Studio at the Museum of Modern Art, New York, Process and Abstraction at Transformer Station, Ohio and Modern Alchemy: Experiments in Photography at The Heckscher Museum of Art, New York. Robertson recently released a leporello bound, scaled reproduction of a 100 foot photograph that was on view at the ICP with London-based publisher Self Publish, Be Happy. Her work is in the collections of the Museum of Modern Art in New York and the Los Angeles County Museum of Art. Robertson is featured in an ongoing documentary for Art 21 titled New York Close Up. Mariah Robertson lives and works in Brooklyn. 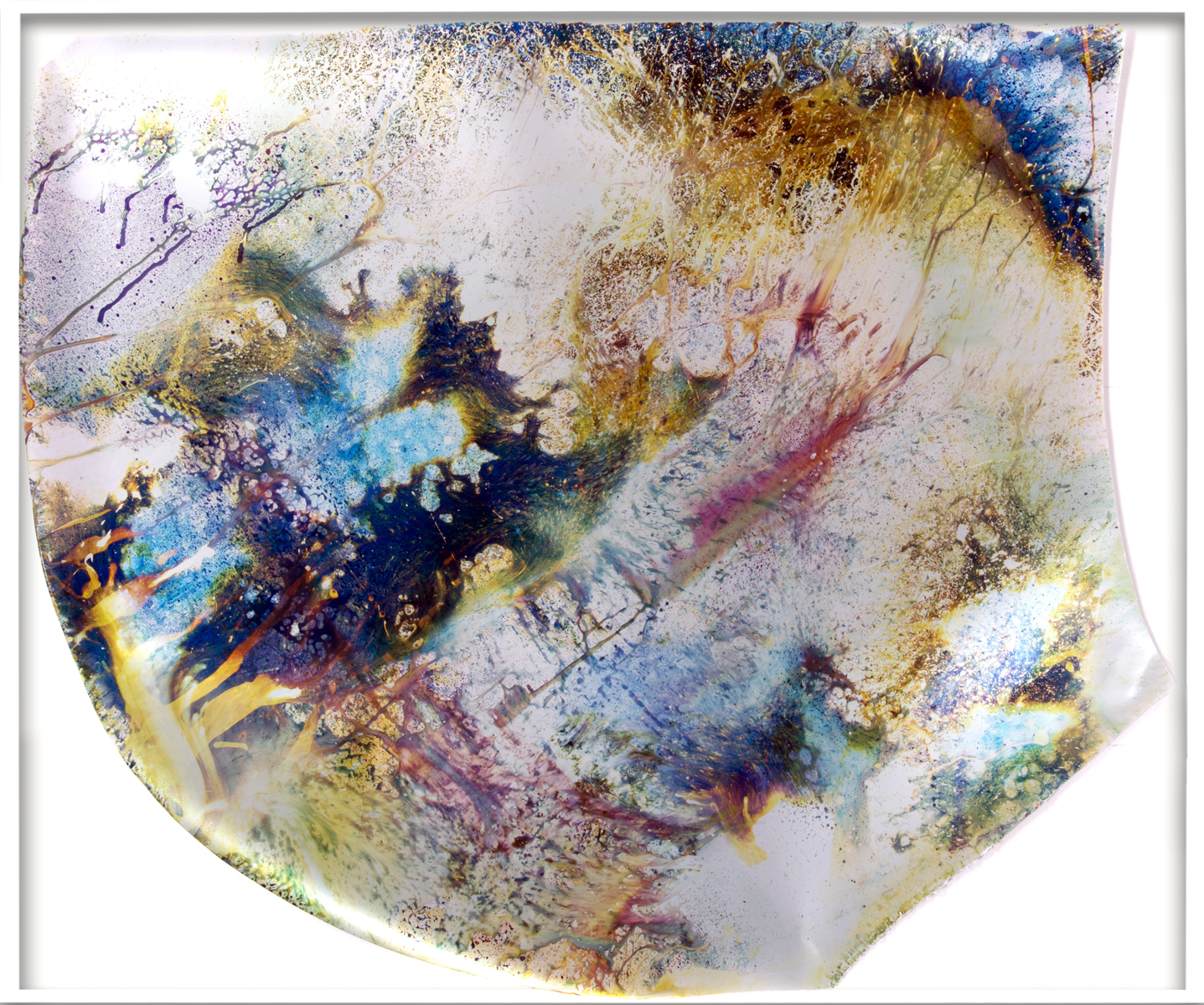 "There is no image, only a record of what has happened to each piece of paper": The work is from a series made with photography chemistry directly applied to photography paper, described by the artist as the extreme end of material-based photography work. The work stems from having been told NO about a lot of things that were clearly pointless, such as; NO one is not supposed to use glossy paper because it is unsophisticated, bad taste, etc. NO One cannot touch glossy paper with an ungloved hand because the oil from the finger will render it a damaged, invalid object. NO One cannot have any dings, creases or dents in the photographic paper ("if you want to be taken seriously"). NO One cannot work with uncontrolled light or temperature. Mariah thus cut giant pieces of glossy paper by hand with a box cutter and wads them up in the darkroom sink, then pouring very hot and very cold chemistry onto them with the overhead lights on like in a regular room. She applies a similar decision-making process to the framing and installing of her exhibitions, with irregular frames and pieces sitting on the floor or stacked floor to ceiling.

Born in NYC, raised in Washington, DC and educated at the University of Maryland, Terri Weifenbach spent a dozen years from her early twenties living in New Mexico and California. She now resides in Paris, France. Bookmaking is central to Terri Weifenbach’s artistic practice. Since her first book, In Your Dreams, was published in 1997 she has authored eighteen more titles. Publishers include Nazraeli Press, onestar Press and Loosestrife Press. In 2019 she published Des Oiseaux with Editions Xavier Barral, as part of the collection of the same name. She has had numerous solo and group exhibitions internationally and her work is particularly appreciated in Japan: since 2000 her work has been presented in solo and group gallery exhibitions in Tokyo, Nagoya, Nara. Her first solo museum show took place in 2017 at Izu Photo Museum in Clematis no Oka and in spring 2020, the Saitama Photography Triennial, guest curated by film director Shoji Toyama, included a large selection of works by Terri as part of the festival theme of flowers. Terri collaborated with artist Rinko Kawauchi on the exhibition and book Gift (2014), and has participated in numerous workshops, residencies and lectures organized by different Japanese cultural institutions. Weifenbach is also renowned as a teacher and, in addition to national and international workshops, she has taught at the Corcoran College of Art and Design, Georgetown University and as Lecturer at American University (Washington). Terri Weifenbach's work can be found in international collections such as the Center for Creative Photography (Arizona), the Sprengel Museum (Germany) and the Collection Hermès in France. She is a Guggenheim Fellow having received the distinction in 2015. 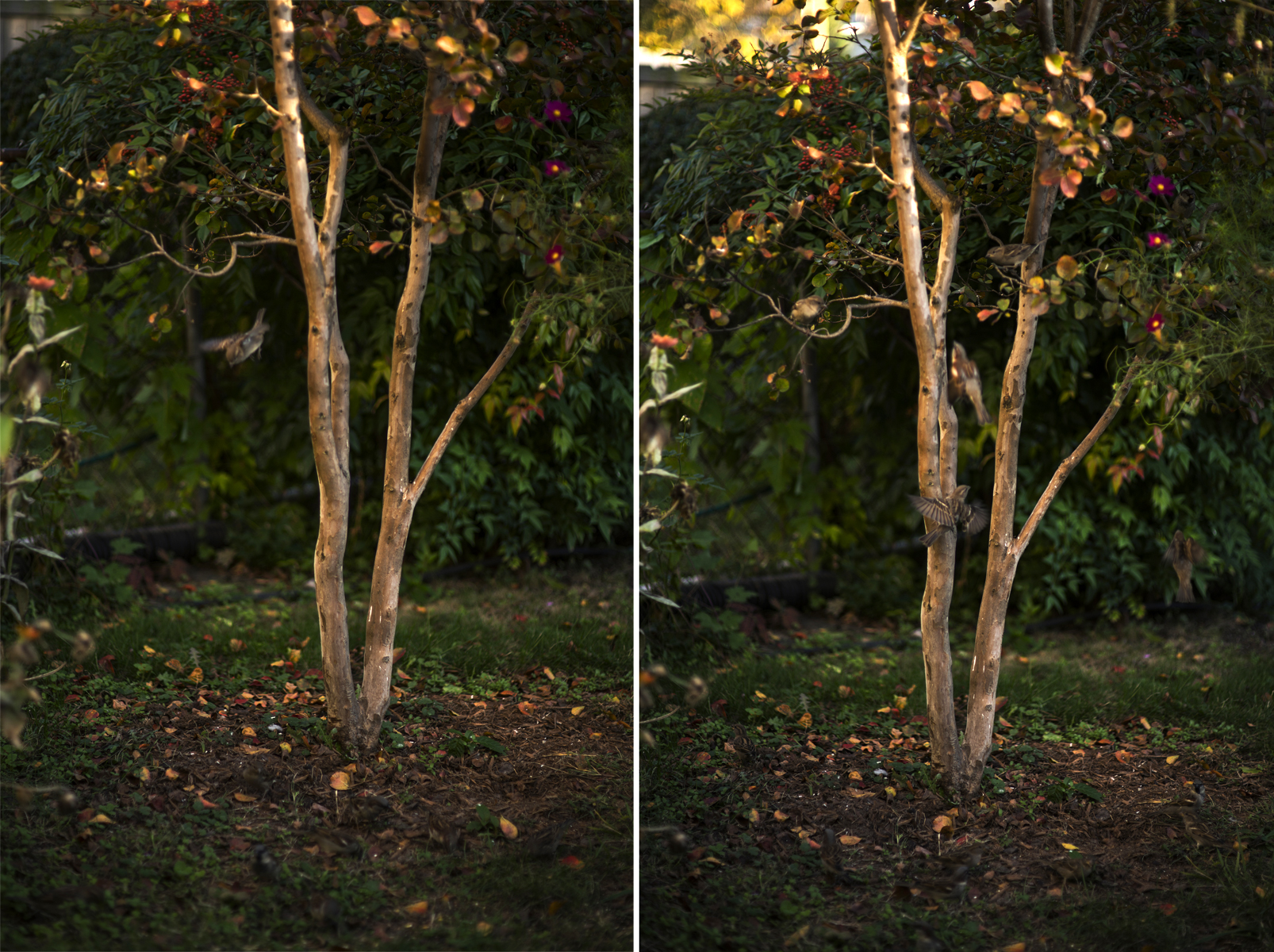 Photographed in the garden of the artist's home in Washington DC, the diptych from the series Des Oiseaux (2019) captures the secret life of the many species of birds that inhabit our cities. Often photographing at ground level, the artist reveals the dives and looping spirals of sparrows, finches, and warblers hidden in tree trunks and amongst the leaves. The changing seasons are captured through the evolving colours of the garden and the artist deploys both a blurred and an ultra-precise focus that construct an intimate observation into this small and delicate world.

Susan Derges works with imagery taken from the natural world and its relationship to themes of self and consciousness in science, psychology, spirituality and the imagination. Although Derges has made work in response to many different places and situations, her core impulses and motivations as an artist stem from her relationship with one particular environment, Dartmoor in Devon, a place she moved to over twenty-five years ago and where she still lives and works. Derges’ work is deeply grounded in this area, and despite its transcendent, metaphysical associations, her art has drawn much of its energy and distinctiveness from a forensic relationship with place, and from recurring, rhythmic encounters with her surrounding landscape. Susan Derges' work has been exhibited and collected worldwide. She spent 6 years working in Japan during the early 1980’s during which time she developed the camera-less photographic techniques for which she is now known, which have more recently been exhibited in the 4-person survey show “Shadow Catchers" at the V&A London, 2010 with an accompanying publication. A major body of work based on the River Taw was exhibited widely during the 1990’s in the UK, Switzerland, Japan, the US, Peru, and formed the content of a number of books including “River Taw” Michael Hue Williams Fine Art London 1997; “Woman Thinking River” Fraenkel Gallery San Francisco and Danziger Gallery New York 1999; “Liquid Form” Michael Hue Williams Fine Art London 1999; and “Elemental” Steidl Germany 2010. A new body of work, “Mortal Moon”, will be on show at the Greenwich Maritime Museum Queens Palace this spring through end of 2019.

This work is one of the iconic, unique works that the artist has re-worked as a polymer photogravure prints. The works in question revisit a particularly fertile period in which Derges shifted the studio-based and experimental nature of her practice into the darkroom of the landscape itself, with the immersion of photographic paper in rivers and on the shoreline at night. The locations of the work were places she knew intimately – the River Taw as it runs through Skaigh Wood, and the bridge at Blackaton Brook that she has walked over almost every day since moving to Dartmoor in 1992.